Whenever I talk about O&O Syspectr I always start with the original idea. This is now over two years old and came about by coincidence while we were working on a customer project though one of our sister companies: a migration from “Legacy” desktop applications to web applications. Up until that point I personally was at home in the desktop world. However, the charm of a web application fascinated me and still does: no installation required, all users have the same version, very quick adaptations from one central location and easy to use – even on the road.

So I asked myself: why this couldn’t be applied to our desktop applications? After a few initial meetings here the initial idea was born: IU, which stands for “Invisible Utilities” – the opposite to the usual, traditional user interface.  We therefore wanted to develop an application that could be completely controlled via a browser and no longer had a user interface on the PC.

First version: not bad, but…

Initially, we (me, actually!) worked on the project more as a “sideline” to our normal projects and it also served as a study into what was technically possible. The result was a first version that was not actually bad but did not live up to what we had imagined. So we got rid of it and started more or less again from scratch (we of course developed and got experience with new technologies and techniques that we applied later on).

The second version was better, but still not ideal. Again we went back to the drawing board and took a very close look at it. What would our customers expect from us? How can they control it? What hardware and browsers are they using? 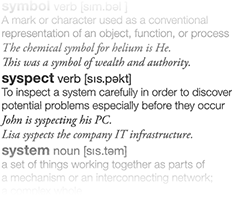 By the end of 2012 we were ready: we had finally found the approach for what would become O&O Syspectr (and we had a name, but that is another story). It would be easy, quick and pretty much the finished product, usable on every device in every modern browser and also optimized for touch technology. Thus began the development of today’s product and now it is by no means a sideline anymore but a fully-fledged project in its own right.

We have received a lot of feedback from both our beta testers as well as from personal discussions over recent months. Much of it has been adopted and implemented. For example, many people initially reacted with “Cool. If only it had a remote desktop … “. We said the same thing, and it now has a remote desktop function that runs completely over a browser. Self-developed and as simple to use as website! Would it interest you to know how we can control a Japanese Windows system with a Japanese keyboard on your Smartphone?! Don’t worry, we support English, German and all other keyboards too! ;-)

Many thanks for your trust, and I genuinely hope you enjoy using O&O Syspectr!